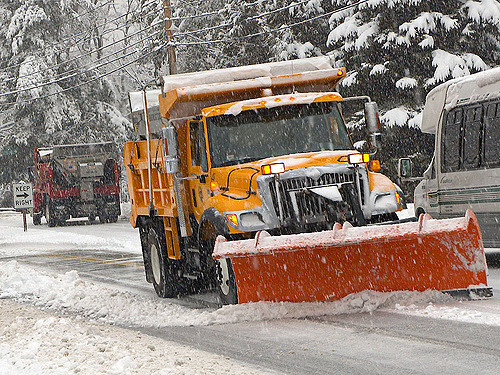 Snow and ice storms have been making their way across the country with regularity this winter.  We’ve been impacted here in NJ only slightly compared to other areas of the country, but when needed, the state, county and local road crews have been out doing great jobs keeping us safe on the roads.

Sodium chloride, or rock salt, is the typical de-icing chemical used on our roads and highways. It lowers the freezing point of water, letting it remain as a liquid at colder temperatures and its large granules help provide traction for vehicles and pedestrians alike, often with the addition of sand.  However, while salt does an excellent job of de-icing and keeping us safer on our roads, the long term damage to the environment from excess road salts causes a perennial tension.  Like the practice of using too much plastic in our daily lives, this is another practice the results of which don’t just “go away.”  Salt on the roadways and sidewalks washes off into lakes and streams and seeps into groundwater supplies making a salty home for aquatic plants and wild animals and adversely affecting the quality and taste our drinking water.  Our pets too, are adversely affected by the big, jagged granules of rock salt between their paw pads.  They can irritate the area around the paw pads and cause the animals to lick the area.  The ingested salts and other contaminants can irritate their digestion or worse still, poison them.

Excess salt in the landscape is toxic to plants.

Protect your landscape from salt damage. The Ewing Green Team recommends you use coarse sand and/or clean clay kitty litter to provide traction on your sidewalks and driveways. If you must use salt, try to limit its use as much as possible.  You might erect fencing to protect sensitive plants and minimize their contact with the salt product.   After icy winters where a number of salt applications were necessary, irrigation of the soil prior to spring green up to leach out the sodium and chloride has also been shown to be effective.

There are a number of alternatives to sodium chloride for both residential and government usage that have cropped up due to environmental concerns. These include increased use of sand, calcium magnesium acetate, calcium chloride, magnesium chloride, cheese and pickle brine (Bergen County in NJ has experimented with pickle brine), beet or corn solution,  potassium acetate, and an idea for the future – solar roads.[1] Calcium Chloride is the alternative that is most readily available to homeowners at your local hardware store or home improvement store and our comparison follows.

Rock Salt is the number 1 enemy of concrete. While effective at melting snow and ice at temperatures as low as 20 °F, during colder weather it allows melt-off to refreeze. This leads to a long series of alternating freezing and thawing, which will erode your concrete driveway and sidewalk surface.  Additionally, rock salt has the highest quantity of chloride ions in it of any deicer, and these ions can dissolve in water and pollute local lakes and rivers and cause potential harm to vegetation and animals.  It is also very corrosive and harms certain metals such as rebar in your concrete structures and the underbody of vehicles.  A vehicle that has spent time on salted roadways should have the underbody washed frequently to reduce the corrosion of the steel structure.

Calcium Chloride is effective to as low as -20 deg. F. It is noncorrosive and will not harm concrete or other surfaces.  It is more expensive than rock salt as a product, but in the long run of its use does not cause the need for the repairs that the damage that Rock Salt causes and, if used as directed, will not harm vegetation.[2] It also works much faster and pound for pound it melts twice as much ice.[3]

Anyone who has been through an ice-storm will justifiably applaud the de-icing benefits that rock salt provides for our road crews and around our homes. However, its long term environmental impacts call for inclusion of more environmentally friendly and unfortunately, more expensive options.  We hope that a combination of these options will make us safer in both the short and the long term.

One thought on “Winter De-Icing Choices: An Eco-Dilemma”