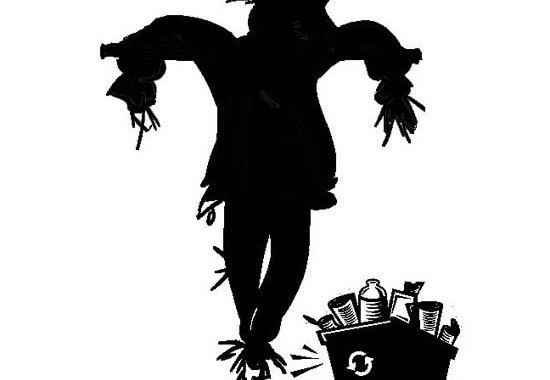 The nor’easter that blew in yesterday may have dampened the costumes, but not the spirits of Ewing’s Trick or Treaters who came out en masse with their families for the annual Spooktacular Halloween Celebration held yesterday at the Ewing Senior and Community Center, which was moved indoors this year to accommodate the inclement weather.

Held in conjunction with Trunk or Treat was the Green Team’s annual Scarecrow Contest. This year, our fifth celebration of the event, we also moved our Scarecrow indoors and offered pumpkin painting for the little kids and the opportunity to participate in our new community art project – a mural that we will be creating out of plastic bottle caps.

We extend kudos go to all of the participants in our 2018 Scarecrow Contest.  The entries exhibited new heights of creativity, resourcefulness and recycling know-how.   We thank and congratulate everyone who contributed an entry.  All were winners, whether they took home a prize or not.  Winners were judged on originality, artistry and the creative use of recycled materials and had to be constructed of at least 80% recycled, reclaimed, and/or reused materials.

As has been our custom, there were ca$h prizes.  This year there were three $50 prizes for the following categories: (1)  Family, (2) Youth Groups (Schools, Scouts…), and (3) Adults (only).  New this year was a $25 prize for the People’s Choice that was determined by Trunk or Treat event goers.  Each Trunk or Treater was given a raffle ticket to vote on their favorite Scarecrow.    Without further ado, here are the winners.

Winning the Family Award this year were Cora and Samantha Dupee for their Adams Family entry, Thing and Cousin It.  Cousin It had a base constructed from an animal feed bag, hair made up from hay bale twine, a hat made out of cardboard, and glasses made from sunglasses. Thing’s base was repurposed metal fencing and the actual hand was made from bottle caps.

The popular favorite was Scaredy Crow.  This entry was created by Meghan Jackson and family members Allison and Aidan Wittman.  This scarecrow is new to the job and is finding out the hard way that it may not be the right job for him.  You see, he’s scared of crows!  Let’s just say he’s not quite outstanding in his field yet.  His head is made from a plastic jug and newspaper  and wrapped in burlap.  His arms and legs are made from water and soda bottles, supported by wire hangers.  His clothes were made from woven plastic bags (think a kid’s potholder project).  The body of the crow is made from papier-mâché (water, flower, and newspaper).  Its feet and wings were shaped from wire hangers.  The feathers were made from flattened aluminum cans. 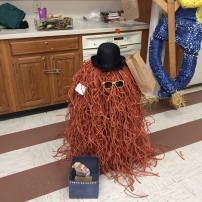 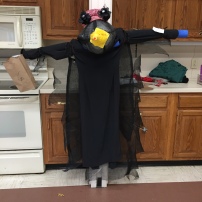 Audrey Ann, submitted by the seniors at Ewing Independent Living 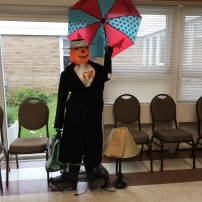 We also extend our thanks to the local municipal officials and artists who had the extremely difficult job of scoring the entries:  Councilwoman Jennifer Keyes-Maloney, Ewing Arts Commission Chair Mel Antler, local artist Robin Keyes, and local artist and member of Art Has No Boundaries, Ann Cheslock.  Thanks also to Councilwoman Sarah Steward who served as the event announcer.